An Dåine schreef:Hurricane warning issued for Paulette, mandatory evacuations on the Punet Isles
Hurricane Paulette to arrive by wednesday - Gusts of more than 200 km/h expected 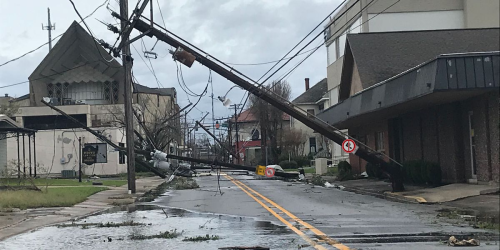 The Pötama Times schreef:Tories sweep to power in landslide victory

Good afternoon everyone, I'm Frank Dumont in Pötama. We're coming on the air early because we've received word from Marlborough House² that the Chancellor will give a statement at 2 o'clock. A statement about the future of his cabinet and himself.

And there comes the Chancellor, let's listen in.

Chancellor James Rafath: "Good afternoon, for the past five years I've had the honour of being the Chancellor of the Carthamian Federation. The very first leader of a Carthamia that got reunited after almost 70 years of division."

"The past couple of months have brought us an enormous challenge, the Covid-19 pandemic has hit our nation hard. The pandemic and our response to it have shown weaknesses in this administration and in its enforcement of measures..."

"It is clear to me that it is in the best interest of the Federation, if a new Chancellor where to lead the country into the second phase of the fight against the pandemic. Therefore, it is my intention to step down as leader of the Liberal Party of Carthamia³ and not take part in the ensuing election for party leader. I will remain in office until a new party leader has been chosen..."

"I've had the honour of a lifetime to have served as the chancellor presiding over reunification and also as the first coloured person to have served in the highest elected office in this nation. I'd like to thank my wife Sarah and my lovely kids Thomas and Maria for their support in all these years, they have my eternal gratitude."

"I'd like to say thank you and goodbye. Qe Dio protejat Carthamia (Moge God Carthamië beschermen)

An Dåine 14/11 schreef:LPC leadership game is on
Kosinki and Costa enter race - speculation about potential bid from Ronaldo Gareth grows


The Pötama Times schreef:Monarchy proposition on the ballot at General Election

Brendan O'Neill (Chief Political Correspondent - IBC News): Good Evening, I’m Brendan O’Neill. Welcome to IBC Headquarters here in Potama where we’re about to head into an exciting night as the results of today’s General Election will start to trickle in. This is it, after weeks of campaigning and way too many attack ads, Carthamia is making its final choice as we speak. We’re just hours from finding out what that choice is, and if the polls from the last few days are right, we’re up for a three horse race. In half an hour, polls will close in seven provinces and both territories, those being Stelmia, Aningland, Overland, Baia, Costa Norte, The Punet Islands and The Hetman Islands as well as The Cork Islands and Frisland Territories...

”IBC Election Night 2021 19:00” schreef:Polls close in 7 provinces
Brendan O'Neill:It is 7pm here in Potama. At this hour, the polls are closing in seven provinces namely Stelmia, Aningland, Overland, Baia, Costa Norte, The Punet Islands and The Hetman Islands. polls are currently also closing in both territories. If you are in line waiting to vote at this moment you must be allowed in to cast your ballot…

Brendan O'Neill: Let’s take a look at Anđen, Genath Minicius’ seat where 34% of the votes have been counted. Genath Minicius is trailing the Labour candidate Sofia Bernom by several thousand votes. David, do you think he will be able to overcome this gap?
David Agresth (political commentator – An Dåine): That seems more and more unlikely since Bernom’s lead has only been widening with more and more votes being counted. Just to show you how severe this is, at the last general election this seat was carried by Minicius with a monster score of more than 50% of the vote. the fact that he’s trailing at this stage is probably a good example of the dire straits Baldo! is in right now. So far there’s only one out of a handful constituencies currently held by Baldo! where the incumbent is leading right now.

”IBC Election Night 2021 20:00” schreef:Early tory lead
Brendan O'Neill:It is 8pm here in Potama. At this hour, the polls are closing in another seven provinces namely Avamia, Carthiskia, Luraria, Nagneth, Corceđa, Lazanoth and the Catonis. In the coming hour, we will find out whether this early tory lead holds or whether the LPC or maybe even Labour are able make a comeback.

Brendan O'Neill: We have an extraordinary projection in a seat we haven't talked about so far. We're headed to Partash North, that's Overland's 6th constituency where with 95% of the vote counted the ONP candidate Ruben Kuiper is leading the incumbent senator Paula Martinis of the Labour Party with several thousand votes. This seat has never been held by Overland nationalists before, the constituency itself being mostly unionist and Nourian speaking. This is a rare defeat for the Labour Party who's making a comeback elsewhere in the country, and a major shocker for the balance of power in Overland.

David Agresth: This certainly is a big shocker for Overland where the constituencies barely change hands between unionists and nationalists. There's one small thing I need to correct you on Brendan, although Partash North still has a unionist and Nourian majority as you stated, the last three censuses (2019, 2009 & 1999) have shown a remarkable growth of Overlands speakers in the constituency. Partash North used to be part of the wider exurbs of Metro Partash until the late 1990s but have since grown in population becoming part of the Partash suburbs, most of these newcomers are coming from Overlands and nationalist areas up north in the province.

Brendan O'Neill: We’re ready to make a first call of the evening. At 20:23, IBC News has determined that, based on the election data and results available, the next government of the Carthamian Federation will be formed by the NPP. Zach Schlesinger will most likely become the next Chancellor of Carthamia but at this point it is unknown whether this will be with a majority of seats in the Senate or whether he'll be in a minority on New Parliament Hill. After 7 years in power, it looks almost certain that the Liberals have been voted out and that the Tories are back in.

Repeating: IBC news projects that the next government of the Carthamian Federation will be formed by the NPP. Not enough data are available to suggest whether this will be a majority or minority government. Let's head to Sarah Mardith who's at NPP headquarters in Lezrahym...

”IBC Election Night 2021 21:00” schreef:NPP Minority or majority? Nouria, Gonsales, Kardog and Flunyth will seal the deal
Brendan O'Neill:It is 9pm here in Potama. At this hour, the polls are closing in the final four provincies, those are Nouria, Gonsales, Kardog and Flunyth. Nouria and Kardog in particular will most likely decide whether the incoming Schlesinger cabinet will have a majority, or not.

Brendan O'Neill: At 22:34, IBC News is able to call this election. We can tell you what’s looked clear for some time now. The incoming Tory government of Zach Schlesinger will have a majority, the NPP getting well over 200 seats in the Senate. NPP candidates are currently leading or elected in 215 constituencies. (images from cheering people appear on screen) These are scenes from NPP election headquarters in Lezrahym, where we expect Chancellor-elect Zach Schlesinger to give a victory speech shortly. Let’s head back to Sarah Mardith who’s there...

IBC Election Night 2021 22:48 schreef:Analysis of the Liberal defeat
David Agresth (political commentator – An Dåine): ...Look Brendan, we’re seeing constituencies across the nation where the Liberals and Labour are keeping one another down and that the tory candidate takes the seat despite barely getting more votes than last time. This is First-Past-The-Post and the vote splitting it causes at its finest.
For decades, the LDP promised that they would reform the voting system, getting rid of FPTP and replacing it with a more representative system. Up until they won the 2014 election, afterwards they didn’t utter a word about that reform and it became taboo truly in the party once they started securing absolute majorities at the federal level and in Carthamia Proper (Klein-Carthamia). Tonight that voter deception has come back to haunt them.
Lindsay Merdath (Leader of the Opposition (2017-2019) – NPP): Back in January and February, there was so much talk of a Progressive Coalition, or an anti-Schlesinger coalition if I may say so, between Labour and the LPC. The talks broke down at the start of the 3rd wave in the pandemic, when the LPC was too confident in the vaccination programme despite Labour and the NPP ringing the alarm bells. It was Covid all along that killed the victory chances of the left in general at this election.

This is a CBN News Network Bulletin, I'm Orvas Derasoth.